In 2012, Elizabeth Schaefer asked her father if she could pitch for her softball team.  Not knowing much about softball and even less about softball pitching; her father, James Schaefer said, “Go watch a softball pitcher on YouTube and then practice with your brother.  If I think you look like you might be able to pitch, I will find someone that can help you.”  Elizabeth did exactly what her father asked, and 1,000 strikeouts later they are celebrating her accomplishments.

On June 14, 2015 while E’s 10u Texas Travelers were facing the 02 Texas Glory in the 12u Summer Swing Tournament Championship game; she stuck out her 1000th batter on an outside fastball. 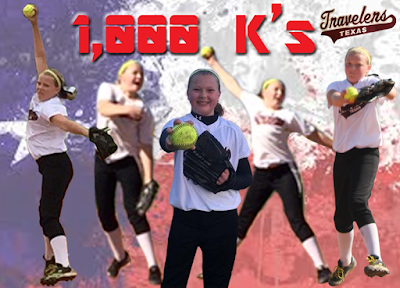 Somehow the stars lined up correctly to get Elizabeth the right instruction as well as find the right team to allow her to flourish as an elite softball pitcher at the 10u level.  James was very involved with his son’s select baseball and football teams.  Joseph, Elizabeth’s older brother by 2-years was practicing at a high school facility in Rockwall, Texas.  An acquaintance of James happen to be at the field taking his daughter to pitching lessons in the building next to the field.  James asked him to introduce them to his friend’s daughter’s pitching coach.  That is where Elizabeth was paired with Coach Rick Lee.  Coach Lee has put several girls into D1 colleges and has a plethora of starting varsity high school pitchers across the Dallas and Fort Worth area preparing for the ranks of college.  Coach Lee called Elizabeth’s dad after the first lesson, and said that if she sticks with pitching she would be successful as long as she continued to put in the work.  “Elizabeth is rare in that she combines terrific velocity with an ability to move the ball and change speeds with command.  She has also shown a great work ethic while seemingly enjoying the work it takes to reach the top” states Coach Rick Lee.

However, accomplishing this feat doesn’t end here.  Elizabeth wasn’t always thought of as a softball pitcher. Even after going through 3 months of pitching lessons, the team she played for at the time never let her see the mound.  After that 2012 fall season of not getting to pitch, her dad had her play a Season and half (spring and fall) in the Rockwall recreational league.  She quickly earn a reputation as being one of the fastest pitchers with good control.  After the 2013 fall season, both Elizabeth and her dad wanted to see how she stacked up in a more competitive select organization.  Her dad made some inquiries of some North Texas Softball teams, and scheduled tryouts.  There were several teams that had shown a little interest in her, but most of the teams already had pitchers they were happy with.  The Schaefer’s were just looking for a select organization that wanted to give her a little mound time and grow into a strong pitcher.

Enter, the Texas Travelers Select Softball Organization.  A friend of Elizabeth’s dad recommended her to try out for the Texas Travelers.  He said, it would be a great fit as they already had two 2003’s and Elizabeth being a 2004 player; it would help her grow into the role of being a select softball pitcher.  This would prevent Elizabeth from being thrown to the wolves in her first season as a select softball pitcher.

When Elizabeth tried out for the Texas Travelers, it was less than a stellar performance.  She was nervous.  It was cold, and she had just gone through the Texas Travelers hitting lessons (hitting and swinging the bat over 1000 times).  “Elizabeth had blisters on her hand and four coaches standing in the cage as she threw pitches to their catcher.  It seemed like every tenth pitch was a strike.  I thought for sure they would not want her.  However, the coaches invited her out for another look at an outdoor practice” adds James Schaefer.  The next practice was a lot better as Elizabeth was in her element on the softball diamond.  Her second performance earned her a spot on the Texas Travelers softball team.

The spring season, Elizabeth was committed to a basketball and volleyball team which the Travelers accommodated her to play.  However, Elizabeth quickly became the “Go-To” pitcher helping them win several tournaments and a berth to the USSSA World Series in Florida.  The 2014 fall season, Elizabeth and her team set a goal to play ASA/USA tournament ball which is the most prestigious governing body in Women’s softball.  Their goal was to earn a berth to the 2015 ASA National Championships in Normal, Illinois.  Today, they have accomplished that goal as being chosen as the State of Texas representative to the tournament and added another lofty goal; to become the ASA National Champion.

Elizabeth’s, or better known as “E” to her teammates and fans is still the “Go-To” pitcher for the Texas Travelers.  As she is winding down her second year of select softball she has reached a milestone few players her age have accomplished.  She has struck out over 1000 batters since she started pitching.  Even more impressive is she rarely walks a batter averaging 1 base on balls for every 20 batters she strikes out.  When you add her WHIP (Walks plus Hits given up per inning pitched) she has a state best of .81.  Not counting pitching for her rec team this season, Elizabeth has had 11 no-hitters thus far for the 2015 season and batters are batting less than .155 against her.  There have been many games where she has struck out every batter she has faced in a game.

Turning 11 years old in March, Elizabeth has earned these stats in a very impressive manner.  First, her 10u team plays the most competitive ASA tournaments in the country so she is facing the best hitters around.  She rarely pitches against weaker teams that would easily have boost her stats.  At 9 years old (last year) she also pitched for a 12u team leading them to win the league championship.  This year, in addition for playing for the Texas Travelers, she also pitches for a 14u Rec team where she has had 5 no hitters.  That’s pretty impressive when you think about the players she is facing.  By the time Elizabeth gets into high school as a freshman, the 14u girls will have already graduated.

Elizabeth has 3 pitches she uses.  Her fastball has been clocked at 53 mph at the 43 feet (high school level) with her drop ball registering at 51 mph.  Her deadliest pitch is the 36 mph flip change making batters look downright silly.   When she pitches from 35 feet (10u softball pitching distance), Elizabeth has been clocked as high as 56 mph.  Most of her strikeouts have come from the drop ball which looks like her fastball, but then drops just under the swing at the last second.  Currently, her pitching coach is developing her curve and rise ball with the screw ball to follow.  However, Coach Lee does not want to add those pitches until the 12u season as it could interfere with the effectiveness of her fastball.

Her goals are pretty straight forward.  She wants to help her Texas Travelers win ASA Nationals.  When she enters high school, she would like to win a State Championship or two.  She would like to be recruited and play for a D1 College helping them to a National Championship.  Then her ultimate goal is to be chosen as one of the top 18 girls to represent the United States playing for Team USA.  To accomplish these goals; Elizabeth knows there is a lot of work that still has to be done.  She knows she will have to increase her velocity into the upper 60’s and continue to understand how and what pitch she should deliver to tough batters.  At 5’5”, Elizabeth is still growing which will allow her to increase her strength helping her achieve this criteria.  She has yet learned to maximize her leap, but once she masters this, her velocity will increase even more.

Elizabeth is a pretty special player and sure to be seen at a higher level in the future if she continues to put in the work.  Her workout schedule includes practices with her 10u team, practices with her 14u team, pitching lessons with Coach Lee and then working out on her own with her dad or anyone else willing to catch her.  Elizabeth loves everything that comes with pitching on the mound and enjoys her team looking to her to deliver excellent results.