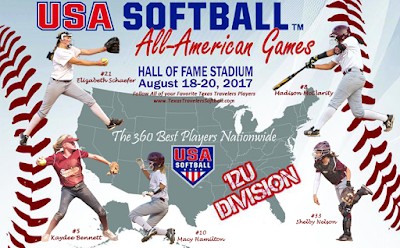 Texas Travelers Gold players; Elizabeth Schaefer (2022 Pitcher), Kaydee Bennett (2022 Shortstop), Madison McClarity (2022 1B), Shelby Nelson (2022 Catcher) and Macy Hamilton (2022 Outfielder) will help lead an All-Star cast of elite softball players at the 12u level.
“The USA Softball JO Commissioners are very excited to host an event that showcases 360 of the best 12-under players from around the country,” said USA Softball of Southern California JO Commissioner Kristi Allen. “We are excited to give these athletes the opportunity to play at the ASA Hall of Fame Complex representing USA Softball.”
With teams selected from the 10 USA Softball Regions, a total of 24 teams from across the U.S. will compete in the USA Softball All-American games.  Each region identified top players during ASA Sanctioned events and were chosen by commissioners and coaches of the region. Athletes had to be on a USA Softball registered team for the 2017 season and must be age eligible for the 12-under JO division. 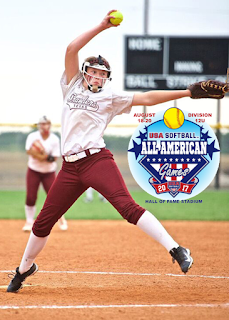 Elizabeth Schaefer has been talked about as one of the top pitchers in the country in her age group for several years.  She is a hard thrower with a fastball that is consistently hitting 60-61 mph, but can easily throw a 36-38 mph changeup to make hitters look downright silly.  In addition to her fastball and change; Elizabeth is known to throw a drop ball that will fall off a cliff at 57-59 mph.  She keeps the batters honest adding in a Rise, Curve and Screwball which allows her to be quite successful.  Schaefer is a very loyal player only playing for the Texas Travelers since getting into select softball and has rewarded the organization with over 1700 strikeouts which is the All-Time strikeout record for the 21 year old organization.  In 2015, during the ASA/USA National Championships in Normal, Illinois; she pitched 9 innings and had 18 strikeouts during the game which is an ASA single game strikeout record for the National Championship Tournament.  Playing at the USA Hall of Fame Stadium will be exciting for Elizabeth as she earned her 1500 career strikeout in the same complex last year helping the Travelers win the ASA Oklahoma HOF Tournament.

Elizabeth will be entering the 8th grade.  After, she will attend Rockwall High School.  In addition to playing softball, she is the captain for the Texas Assault National Club Volleyball Team where she plays middle.  She led her district winning 7th grade basketball team in points, rebounds and blocked shots.  Elizabeth also plays on the Volleyball A-Team, Soccer A-Team and placed in district throwing the discs and shot for Track & Field.  She maintains near perfect grades in school with an overall 98 GPA in Pre-AP Honors Classes and was selected for the DUKE TIP Academic Talent Search.  Schaefer is in Honors Choir and competes in various UIL events.  After high school, she plans to study law and is looking for a college that will help her reach her life goals. 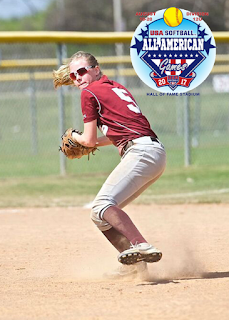 Kaydee Bennett is the All-Time leader in hits for the Texas Travelers organization.  Her amazing speed and triple threat option at the plate causes problems for opposing defenses across the country.  She can slap, bunt and hit for power with ease.  The story line is always the same, “Where Kaydee goes so does the Texas Travelers offense!”  This is a lot of pressure for many, but Bennett takes it upon herself to make sure she is on base and she has delivered with an On-Base percentage of .898 this season.  Once she is on base, Kaydee displays her superior speed.  Winning numerous select softball challenges; Kaydee has been clocked at 2.7 Home to First and 11.83 Home to Home.  In addition to delivering at the plate, Kaydee is the leader of the Texas Travelers infield playing shortstop.  Bennett can be seen in tournaments tracking balls behind third in foul territory to diving plays on the other side of second base.  If she played in the NFL, she would be a true safety and that is exactly what she is for the Travelers.  She is a pitcher’s safety net on the field.
Bennett is a dedicated student athlete at Sunnyvale Middle School, a recognized high performing school in Dallas County.  Kaydee is heavily involved and accomplished in her school related and extracurricular events include: UIL Academics, STEM, All-A honor roll in advanced courses, A-team volleyball, A-team basketball, and track. Outside of school, Kaydee plays club volleyball as a left side hitter for Texas Assault National Club Volleyball Team, the top team in her age group.  Outside of school and sports Kaydee loves animals, reading, outdoor activities and spending time with her friends and family.  After high school Kaydee would like to continue her studies in the medical field or law. 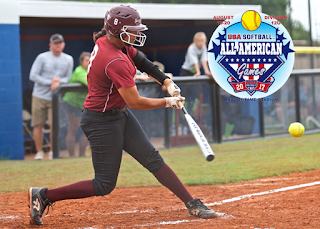 Madison McClarity came to the Texas Travelers upon her family’s move from Arkansas.  She was highly touted as one of Arkansas’s best 04 pitchers with a very strong bat.  Madison has played catcher, 1st and 3rd base as well as pitcher along with all outfield positions.  She helped lead the Arkansas Wild Thangs 04 to 8U VTD World Series Championship in Coppell, Texas and led the Arkansas Elite 04 team to a 10U Class B USFA World Series Championship in Panama City Beach Florida.  When she joined the Texas Travelers in 2016 she made the choice to move to focus on her play at the corner infield positions which has allowed her to become completely dominate at the plate.  However, Madison can still be seen on the mound from time to time.  For the Travelers, McClarity is a power hitter consistently sending bombs into the stratosphere.  Her 5’9” frame makes her easy to spot on the field and her leadership is seen in the dugout and outside the lines.

McClarity is an outstanding student in Rowlett where she is an All-A/B student in Pre-AP Honors classes for Math, English and Science.  She was the leader on the Basketball and Volleyball A-Teams and chosen as the MVP for Volleyball.  In addition to playing for the Travelers she is also on the Lady Hawks AAU travel basketball team where she consistently leads the team in rebounds and block shots.  During her down time this strong athlete loves to crochet and play the saxophone.  After high school Madison would like to study architecture in college. 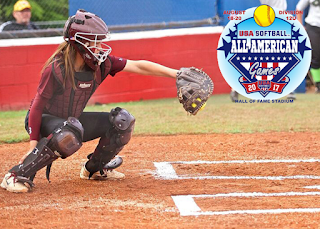 Shelby Nelson wanted to play in the most competitive tournaments in select softball and made the choice to play for the Texas Travelers in the Fall of last season.  Quickly, she proved to become a pitchers best advocate with her blocking and framing ability behind the plate.  She is known for making balls look like strikes and her strong leadership on the field.  Shelby can be seen catching for some of the top D1 pitchers in the country which has elevated her into one of the best signal callers at the 12U level.  She has earned USSSA All-American team, Team MVP at the OU softball camp and Most Improved Award.  During the Texas Travelers Spring/Summer Season, Nelson has quickly become a fixture in the lineup due to her power and strong contact.  It is becoming a regular occurrence with her batting over .700 and racking up doubles and RBI’s for the team.

Nelson is an All-A Honor Roll student at Lake Dallas.  She has received the Principal Award (Top Student in the grade), DUKE TIP (Academic Talent Search) and National Junior Honor Society.  She is also on the student council.  In addition to being a great student and playing for the Travelers; she is a starter for her middle school’s volleyball, basketball and tennis teams.  After high school, Shelby would like to become a zoologist. 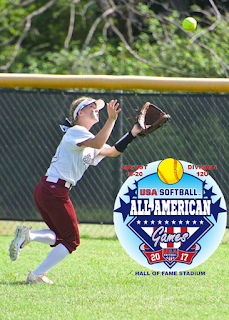 Macy Hamilton is an exciting player to watch.  The Texas Travelers asked her to be a pickup player in last season’s Nationals held in Missouri and she quickly became a team favorite.  She is loved by all of the players and her fans with her hard-nosed efforts at the plate, on the base paths and in the field.  Macy is quick to listen to the teams needs and fast to make adjustments to meet them.  This has been shown recently as she is becoming a great slapper.  She is a true utility player for the Travelers as she plays all three outfield positions and middle infield.

Hamilton is an All-A Honor Roll student, Duke Tip (Academic Talent Search) and National Junior Honor Society recipient at Wester Middle School.  She was the team captain for her district champion volleyball team, starting point guard and team captain for her basketball team.  She was also on the 4X400 relay team for track.  In addition to being a strong student and great teammate for every team she plays on, Macy is a trained vocalist and guitarist.  After she attends Mansfield High School she would like to study Sports Marketing in college.

“I am proud that each of these girls are identified as some of the top athletes at their position.  Texas has some great talent and outstanding select softball teams.  For USA Softball to recognize our Texas Travelers girls is an honor that I am happy to be a small part of” adds, Head Coach of the Texas Travelers Gold Team, Kyle Bennett.

"What a great opportunity for 12-under female athletes across the country to be identified by members of USA Softball's local associations,” said Director of Championships Chris Sebren. “To have the opportunity to come together as individuals and compete as regional teams in this inaugural All-American Games will be such a great experience for them. These select individuals will join some of the best athletes across the world who will be competing in Oklahoma City this year as we host the NCAA Women’s College World Series (WCWS) and the World Cup of Softball. What a great way for USA Softball to finish off our fast pitch season in Oklahoma City with the inaugural All-American Games.”

Designation to a USA Softball All-American team is the highest honor a player can receive and instantly brands the player as one of the top athletes in the United States. Only 360 girls Nationwide will have the opportunity to wear the USA Softball Jersey at this elite event.
The event will feature a free camp for all players, a meet & greet with USA Softball National Team Members, Opening Ceremonies, and intense competition in a 3 Game Guarantee Tournament and a swag bag for all participants.

To learn more about the Texas Travelers Gold Team and each of the players chosen from the Travelers visit https://www.texastravelerssoftball.com/
at 3:38 PM