Texas Travelers prepare to play in The Lone Star Shootout

Weather permitting, the Texas Travelers Select Softball Team will competing in their first tournament of the Spring Season at Big League Dreams in Mansfield, Texas February 28th and March 1st. 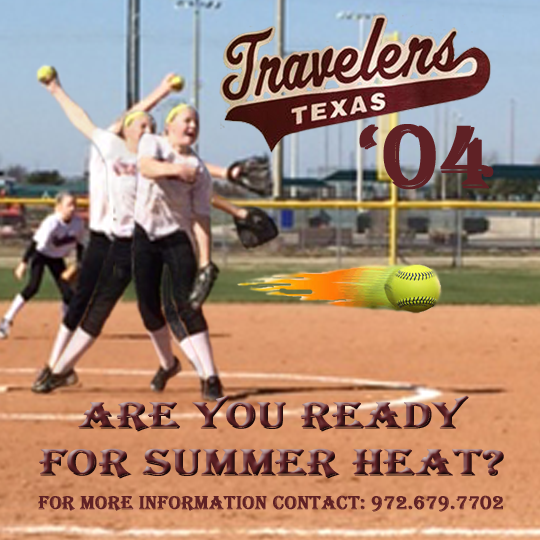 Recently, the Texas Travelers faced a few of these teams in a friendly tournament style format winning handily against the Texas Glory & Angels while tying Texas Shock with a 1-1 combined no-hitter by Elizabeth Schaefer and Kelsey Adams.  Other teams participating in the DFW tournament are 04 Texas Glory, Next Level, Texarkana Xtreme, Texas Fusion, Firecrackers DFW, Texas Flex, EC Explosion, Midwest Elite and Texas Twist.  This tournament will be a great warm-up for The Texas Travelers as they travel to Alabama to play against some of the top select softball teams in the south the following week in the USFA Turf Wars tournament.

The Lone Star Shootout is a sanction USSSA Fast-Pitch Qualifier.  The format will consist of two pool play games which will feed into single elimination bracket play.

Although, many of the Texas Travelers are finishing up championship games for basketball in their respective leagues; the team will be at full strength for Sunday’s bracket play games.  After a few months of not playing on the Softball Diamond, the girls are ready for some competition.  This tournament will be the final step in getting them in game-ready condition as they take their talents out-of-state and then travel the softball tournament circuit on the road to becoming the 2015 ASA National Champion in Normal, Illinois.

The strong North Texas Softball Club has won at IFA-VTD, USSSA, and ASA levels and continues its push for excellence on and off the field.  The team is a fully funded endorsed softball team that intends on continuing its great success in the softball world.