Every September there is talk of cool weather in Texas being just around the corner.  Football season is underway.  Doves are being taken down by the dozen.  However, every softball fan knows that the most prestigious road to crowning the National Champion for Girls Fastpitch will begin with the Dallas ASA Fall Preview. 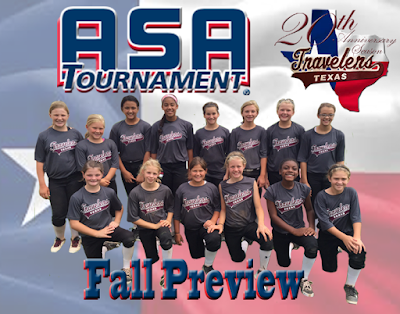 The 04 Texas Travelers will be playing the 2015-2016 softball season as a first year 12U softball team after finishing 3rd in the prominent 2015 ASA/USA 10U National Championship held in Normal, Illinois.  The team has made off-season additions which will surely turn the 03’s heads as they compete on the field.  Their roster includes two of the top 4 pitchers in the country (Elizabeth Schaefer and Karley Wolf).  In the offseason, the fastpitch organization has added the Arkansas Elite legend, Maddison McClarity, Emily Jonte (Texas Glory’s Ace Pitcher),  USA Select Elite All-American Midwest Region Top Performer Riley Rumfield, and a physical hard playing catcher, Kailee Bautista to go with All-Star shortstop Kaydee Bennett who led the team in every offensive category for the Travelers.

The 04 Texas Travelers are scheduled to play Saturday against Texas Fusion 03 at 9:30 AM followed by American Freedom 03 at 12:30 PM.  The evening games will feature the Travelers versus Texas Fusion- Nicholson at 5 PM and then Texas Black Cats at 6:30 PM.  All games will be 1 hour and 20 minutes or 7 innings.  Bracket play will begin Sunday seeded by Pool Play and Single Elimination with the championship game scheduled for 1 PM.

Last year, the 04 Texas Travelers competed in several 12U tournaments winning the 2015 Summer Swinging 12U Championship playing the 03 Texas Glory in the finals.  Recently, the squad looked really strong in their scrimmages against the Texas Travelers 03 team and D1-03 softball organization.  The softball team continues to set their goals high as they compete across the country playing some of the most elite softball teams.  They are utilizing the ASA Fall Preview to get ready for the 2015 ASA/USA Texas Championship Series where the points winner will receive a berth to the 2016 ASA/USA National Championships held in Salem, Virginia.