Dallas/Ft. Worth will be home to the most competitive girls’ Fastpitch tournament this weekend when top 12U select softball teams across the country gather together at Gateway Park in Ft. Worth, Texas.  This weekend the ASA/USA Fall Texas Challenge Series which is the second of three tournaments that award points based on performance to help select who will represent Texas in the 2016 ASA/USA National Championship which will be held in Salem, Virginia. 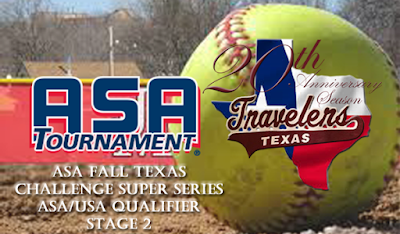 Currently the 04 Texas Travelers are 10 points away from first place, and have a record of 8-3 in ASA tournament play.  The girls finished 2nd in the ASA/USA Fall Preview and 9th in the first leg of the Challenge Series Gold Bracket.

The road to becoming a National Champion will be very difficult as there are a lot of good 04 teams as well as some great second year 12U teams that have the same aspirations.  Some of the top teams in the tournament will be last year’s 10U PGF Champions (Diamond Sports Hot Shots North) and runner-up (Diamond Sports Hot Shots South- formally Texas Chaos).  Katy Cruisers, Texas Bombers, Texas Peppers, Texas Stealth, Texas Aces and En Fuego will all be competing as first year 12U teams as well.  In addition to strong 04 teams, the 03’s will feature American Freedom, Firecrackers, Impact Gold and Texas Glory.

The Texas Travelers will be led by shortstop, Kaydee Bennett who has a .688 batting average and leads her team in every offensive category.  She will have help in the batting order with Riley Rumfield, Emily Jonte, Zariah London and Madison McClarity.  Pitching will also be important as Elizabeth Schaefer (Texas Travelers All-Time Strikeout Leader), McClarity, and Jonte take the mound and try to send the batters back to the dugout without allowing baserunners.


Pool Play will start for the Travelers at 8 AM as they face one of the best 03 select softball teams in North Texas, American Freedom-Shaw, followed by the Texas Glory 2K4 at 11 AM.  The afternoon game at 3:30 PM will have the GT Shockers and then the last game of the evening will have the Travelers playing at 6:30 PM against the 12U HITT out of San Antonio.