Texas Travelers play softball in the Battle of the Ages

The Texas Travelers organization, founded by John Wardlow in 1995, has a great reputation and is known for developing great softball talent.  The Travelers organization has helped place over 175 girls in softball at the collegiate ranks, and will be enjoying celebrating their 20th Anniversary Season of Softball! 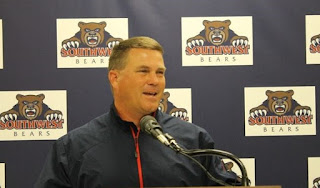 Last year the 2001 Texas Travelers squad was recognized as one of the top 20 softball teams in the country.  The 04 Texas Travelers will be looking to add to their success after finishing 3rd in the most prestigious tournament in the United States; the 81 year old 2015 ASA/USA National Championship which was held in Normal, Illinois.  With the success of the 2001 and 2004 Texas Travelers teams, the organization has added a 05 and 03 team.  (Years denote the year the softball player was born.)

Currently, Kuyrkendall is an Associate Scout for the Texas Rangers, charged with the scouting of amateur players at the college and high school level. Since 1991, he has been an assistant or head baseball coach for Delta State University, Mississippi College, North Florida Community College, and Southwest Community College.  At the four-year level, he helped lead Mississippi College to three league titles in his seven seasons as head coach, and was the NCAA Regional Tournament host in 2003.  His players personally achieved individual recognition as the 2006 NCAA leader in home runs, 2004 NCAA leader in saves, 2002 NCAA leader in strikeouts per 9 innings pitched, American Southwest Conference records for most home runs in a single season – 2006, most home runs in a single game – 2000, 2002, 2006, Conference leader in every offensive category – 2006, and most saves in a single season – 2004. His recruiting efforts resulted in league Player of the Year awards – 2002, 2003, 2004, 2006, and the Freshman of the Year – 2000, 2001, 2002, 2003, 2004.  At the community college level, he saw 68 of his former players sign with four-year institutions. In 17 total seasons as a head coach he had 23 players drafted or signed with professional organizations. The most recent was Kade Scivicque of LSU, who was drafted this year in the fourth round by the Detroit Tigers. Scivicque finished his senior season as the All SEC catcher and was the only Tiger player named to this year’s All College World Series team in Omaha. He was also a finalist for the Johnny Bench Award, given to the nation’s top collegiate catcher.  Coach Kuyrkendall looks forward to bringing the same success to the 03 Texas Travelers. 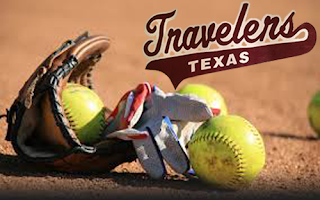 On Tuesday, September 8, 2015 the 03 and 04 teams will scrimmage each other in Rockwall at Yellow Jacket Park starting at 6 PM.  Both teams will be competing at the 12U level although in different sanctioning bodies.  This scrimmage will help both teams gear up for the Fall season preparing for the strenuous Spring Softball Season.

The 04 Texas Travelers have become one of the most talked about select softball teams in the country.  Their roster includes two of the top 4 pitchers in the country (Elizabeth Schaefer and Karley Wolf).  In the offseason, the fastpitch organization has added the Arkansas Elite legend, Maddison McClarity, Emily Jonte (Texas Glory’s Ace Pitcher),  USA Select Elite All-American Midwest Region Top Performer Riley Rumfield, and a physical hard playing catcher, Kailee Bautista to go with All-Star shortstop Kaydee Bennett who led the team in every offensive category for the Travelers. 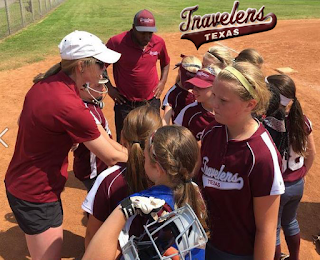 The 04 Texas Traveler coaching staff includes Baylor Bear softball legend.  Strickland’s softball accomplishments through her junior year at Baylor include the 2014 Women’s College World Series All-Tournament Team, 2014 Second Team All-Big 12, 2014 First Team Academic All-Big 12, 2013 First Team Academic All-Big 12, Seven-Time Big 12 Commissioner’s Honor Roll Selection, and Two-time Baylor Dean’s List Selection.  As a junior, the 5’8” shortstop played in all 65 games and started 64 of them.  Her batting average was .291 and led the team in home runs with 14 while tying for the team lead with Linsey Hays at 49 RBI’s.  Her 14 home runs her junior season were tied for the fifth-best single-season total in school history.  In addition to having power at the plate, she only struck out 17 times which was the fewest among the Bears who had at least 161 at bats.  Jordan scored 30 runs, hit 10 doubles and stole three bases.  She posted a fielding percentage of .921 and was second on the team with 73 assist being named Big 12 Player of the Week twice.  The Baylor Bear inspirational team leader tied a Women’s College World Series record by hitting two home runs in a win over Florida State and finished the postseason with nine RBI’s, three home runs and hitting .413.  She is Baylor’s all-time leader in postseason hits and batting average. 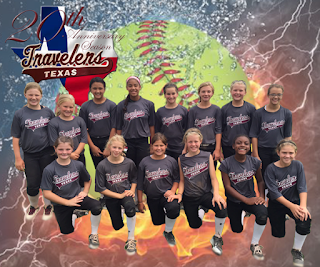 The 04 Texas Travelers will be a team to be reckoned with for years to come when it comes to playing on the softball diamond.  The girls are great as a 04 team, but 03 teams better not be too relaxed when they play these young ladies as the first year 12U team is looking to compete at the highest level of 12U softball.  Last year as a 10U squad, the 04 Texas Travelers played in several 12U tournaments becoming the 2015 Summer Swinging 12U Champions.  The girls recently scrimmaged the D1 2003 softball team earning high praises from their organization as the age and size difference was a non-factor.

In addition to being a fully funded team, the 04 Texas Travelers have a marketing program second to none.  DeliveryMaxx has donated its patent-pending services to help market the 04 Texas Travelers as well as each of their players which will be beneficial when the girls become old enough to start the recruiting process.