Does your Daughter have the IT factor?

You are building a team, so what are you looking for?  Many will say size and speed and that is a great criteria to look at first.  You can’t coach size and speed right?  For the most part, if you are faster and stronger than the others you should go out and win.  However, you can make a list of the fastest and strongest players, but that doesn’t equate into winning now does it?  So the next thing you will hear coaches say is that they are looking for “heart”.  What is heart?  It’s those players that put team ahead of self and perform above expectations.

Those three qualities possessed by players would make any coach happy to have them apart of their team.  But what about the “It factor”?  Does your player have “It”?

“It” is when a player can will themselves and their team into delivering the knockout punch or the winning drive when no one else does.  They do this consistently and expect the ball in their hand when they must deliver “It”.

The first question should be asked is what is “It”?  You can’t precisely describe “It” you just know they have “It” when you see “It”!

Since we can’t describe “It”, let’s talk about who has had “It”. 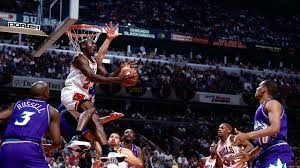 Michael Jordan is the greatest basketball player to ever walk planet earth.  He was 6’6” tall and was like most players who played in the NBA- quick and a good vertical.  But what made MJ the greatest.  He had “It”!  When the game was on the line, he wanted the ball and he knew he would score the game winning shot.  Not only did he know he would score the game winning shot, everyone in the gym knew this fact as well.

Babe Ruth was one of the earliest players to have the “It” factor.  Before homeruns became highlights on ESPN he simply hit the ball out of the park because he liked doing so.  He could do “It” on command.  Pitchers knew he would do it and the Babe even told them before they pitched he would do it.  That didn’t stop the Babe from setting every homerun record in his time and if he were using the technological advance equipment we have today; he would set records that would never be broken again.

Who can forget Michael Phelps?  Phelps came into the 2012 Olympics knowing he would achieve what no other swimmer has ever been able to accomplish.   "I've put my mind to doing something that nobody had ever done before," Phelps said.  He had “It” and now sits in the record books as the most decorated Olympian of all time, with a total of 22 medals. Phelps also holds the all-time records for Olympic gold medals (18, double the second highest record holders), Olympic gold medals in individual events (11), and Olympic medals in individual events for a male (13). In winning eight gold medals at the 2008 Beijing Games, Phelps took the record for the most first-place finishes at any single Olympic Games. Five of those victories were in individual events, tying the single Games record. In the 2012 Summer Olympics in London, Phelps won four golds and two silver medals, making him the most successful athlete of the Games for the third Olympics in a row.

Lauren Chamberlain, NCAA all-time homerun leader is the “Babe Ruth of Softball”, Cat Osterman is one of five pitchers to strike out 1,000 batters with 100 wins, an ERA of under 1.00, and averaging double digit strikeouts.  Obviously, what would a softball blog be if the most famous softball player of all-time wasn’t mentioned?  That’s right, Jennie Finch dominated the softball diamond with the Arizona Wildcats, the USA national softball team and the Chicago Bandits.  She showed she had “It” for years and continues to try to teach “It” at her camps. 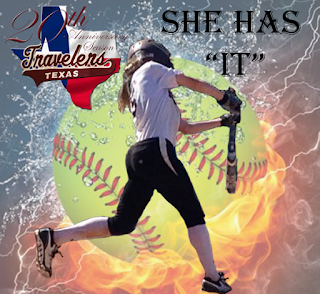 Does your softball player have “It”?  Is she fast?  Does she have size?  How much heart does she display on the field when times are good and bad?  What is her demeanor in the dugout, before games and after?  Is she working out at home when no one is looking?  All of these traits make for a great softball player.  However, is she the player you want up to bat when there are two outs, the go ahead runner on second in the last inning of the game?  Is she the player you want on the mound when you are up by one, bases loaded, and need three outs to win the championship game?  If she has “It” your team has a better chance than not of finishing victorious.  If she has “It” she knows you will call on her to perform and she relishes the opportunity to show “It”.

The 04 Texas Travelers are playing in their first year of 12U softball after finishing 3rd in the most prestigious select softball tournament in the country; 2015 ASA/USA National 10U Championships.  In addition to facing top 04 select softball teams like last year’s PGF Champions Diamond Sports Hot Shots North and Hot Shots South (formally, Texas Chaos); the Travelers will be competing against older 03 teams like 03 Texas Glory, Impact Gold and Texas Peppers Gold.

To compete at the highest level against great select softball teams, the 04 Texas Travelers have to make sure they have girls with “It”.  In addition to the Texas Travelers all-star shortstop Kaydee Bennett (currently leads the Travelers with a .688 batting average, hits, and triples) and pitching ace Elizabeth Schaefer (averages almost 2 K’s per inning, and has a .885 Walks/Hits per inning pitched (WHIP) and has a 1.18 ERA) - both players are picking up right where they left off in 10U select softball- the Texas Travelers have added additional players with “It”.

In two tournaments (ASA Fall Preview & ASA Texas Challenge Series) Emily Jonte (2nd in Doubles, RBI’s, Triples, and Batting Average) and Karley Wolf (Texas Travelers leader in doubles) each boast a batting average over .350 hitting with power.  Riley Rumfield is a team leader in hits, runs scored and on-base percentage.  Madison McClarity gets it done with her bat (Travelers RBI leader) and on the mound (1.02 WHIP).  Each of these girls are showing they have “It”.

Returning Texas Travelers player, Zariah London (who last year was a base running specialist) has stepped up this season showing off her speed in the outfield, but even more importantly she is hitting .462 which allows the Travelers to add another dimension to their already potent lineup.

Each week, the Texas Travelers continue to challenge their players at the highest level.  Each week, players show signs of having “It”.  The more players who have “It”, the stronger the team becomes.