Texas Travelers continue to Break All the Rules

Today, many parents are shelling out tens of thousands of dollars for their kids to play youth sports.  They are filled with hopes and dreams of their player continuing their career in a major college or even the pros.  Unfortunately, there are many organizations and recruiters taking advantage of these families and not thinking twice about it.

In 1995 a coach by the name of John Wardlow identified the need of a team that would put the emphasis on player development versus winning trophies.  He provided a team, to the Dallas/Ft. Worth area, which was both affordable and competitive alike.  Before handing over the reins to Kyle Bennett (current Head Coach for Texas Travelers Gold) he personally placed over 185 girls into collegiate programs. 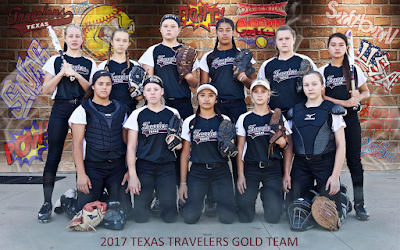 Today, Bennett and his coaching staff continue to provide the same opportunities for their players.  In addition to the Texas Travelers Gold Team, the organization also has 2 other teams in the Dallas Ft. Worth area that adhere to the same principles Wardlow set forth.

In 2017, USA Softball identified the top 360 players in the country.  Teams would be comprised of the best players in 10 regions across the United States and they would compete against each other in Oklahoma City where the Women’s Softball College World Series is played each year.  The Texas Travelers Gold Team had five players (Elizabeth Schaefer, Madison McClarity, Macy Graf, Kaydee Bennett and Macy Hamilton) chosen to be USA All-Americans.  The girls’ hard work on the field was a major reason that their Region 5 team made it to the finals of the prestigious tournament.

Currently, each of the Texas Travelers Gold players are already having detailed conversations with colleges such as Baylor, Texas Tech, Oklahoma State, Mississippi State, Ole Miss, Arkansas, Harding, Tarleton, University of Houston, Texas A&M and several more.  This is pretty significant especially since all of the players are in 8th grade, except for two.  (One in 7th grade and the other is in 9th).  That’s right, the majority of the team will not graduate high school for another 5 years!  Most of the players are already playing on the Varsity Team of their high school’s Fall Ball Team.

Every large organization has approached the Texas Travelers Gold Team to become part of their organization, but the Travelers enjoy the benefits of being independent allowing the coaches to focus on each player’s individual needs.  The Travelers continue to compete at PGF, ASA, Triple Crown, USSSA and other highly touted events while placing at or near the top in each.

The Texas Travelers will continue to do what is right for their players and their players’ families.  They will continue to develop their kids to play at the highest level across the country.  The organization will play in front of many colleges over the next several years allowing the entire team to pursue their dream of playing college softball.

Colleges will absolutely love the players they are getting from the Travelers organization.  The type of player the Texas Travelers Gold has on their squad is one who is very hard working and competitive.  All of the girls are multisport athletes and have the highest grades in their class.  (Four girls play Club Volleyball at a National Level and one plays AAU Basketball).  Several players enjoy singing and playing instruments and a few of the players are bilingual.

Each player has a personal position coach as well as a speed/agility coach.  The Texas Travelers Gold Players are truly the best of the best at their positions.   Colleges will be very excited to sign these kids as the organization and family have not only prepared them for the challenges on the field, but also outside the lines.

The Texas Travelers Gold Team consist of 7 players that often hit a home run when they step up to the plate.  They have a defense that regularly turns double plays.  Their outfield is known for diving into foul territory robbing at bats from opposing teams.  The catchers are true captains on the field daring runners to try to take an extra base.  The pitching staff is second to none throwing all types of pitches and have a range with a fastball from low 60’s with change ups in the high 30’s to low 40’s.  Two players are close to 6’0” and most players are faster than the average freshman collegiate softball player at their position.

For more information about the Texas Travelers visit, www.TexasTravelersSoftball.com