Power and Pursuit of Excellence added to the Texas Travelers

When softball coaches make a lineup trying to field the best team they look at pitching, hitting and fielding.  All spots are important to give the team the best opportunity to win.  When a softball team is organized, a good softball coach will look at the girls makeup and disposition, how she interacts with other girls and how her family gels with the softball family. 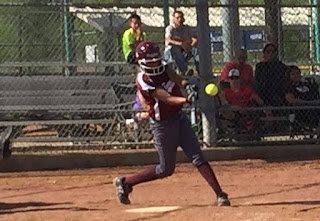 In addition to pitching no-hitters and striking out batters with her arsenal of pitches she carries one of the biggest sticks in select softball.  Madison makes opposing pitchers tremble with her size, speed and powerful bat.  She plays multiple positions on the field including pitcher, first base, third base and outfield and can run like a deer.

However, what makes Madison McClarity the right fit for the Texas Travelers is she is the product of a great family.  Like many 11 year-olds, Madison is a sweet girl, but her family is truly genuine and loyal.  It was a tough decision to leave the Arkansas Elite, but moving to Texas from Arkansas made more sense for her to commit fulltime to the Texas Travelers.  “I want my daughter playing for a team that is competitive, but has a family atmosphere.  I expect the Texas Travelers to stay together and pursue the highest goals as a family” states Rico McClarity, Madison’s father.

“We love having Madison on the team.  She is a great athlete and one many people will talk about in the future as she has all the ability in the world.  However, what makes her special is she is a team first player and her parents are some of the most genuine people you will meet” adds, Head Coach of the Texas Travelers, Kyle Bennett.

Last year when Madison played for the Texas Travelers part-time she had a .400 batting average and was one of the team leaders in Homeruns, doubles and triples.  She won three games pitching for the Travelers boasting a 67% strike percentage with a WHIP (Total Walks & Hits per innings Pitched) of .93 holding opponents’ batting average to a low .136.  In addition, her ERA was .93.