The Texas Travelers are always looking for top softball players in the country to add to their already talented softball club.  When the opportunity opened up for the softball team to add one of the top pitchers in the country; it became a no-brainer as all of the coaches were unanimously in favor of the acquisition. 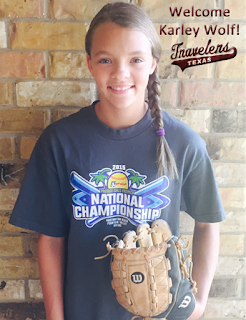 Karley has been playing softball for the last 5 years with four of them being in select softball.  She started playing in the Fall of 2011 with the 03 Texas Glory where she played for two years under Kyle Bennett who is now the head coach for the 04 Texas Travelers.  “I have always enjoyed coaching Karley as she is one of the hardest working girls you will find.  It is a pleasure to have her back and will be a huge addition to our pitching staff and lineup.  Not only is she a great ballplayer, but she is a wonderful young lady with outstanding parents.  She will fit in perfectly with the Texas Travelers.” Adds Bennett.