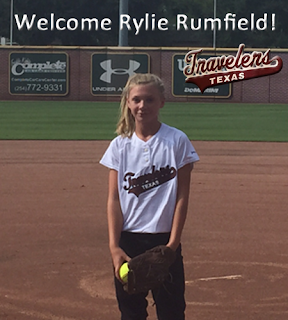 The Texas Travelers, although strong, look to improve and continue to pursue competing against the most elite teams in the country.  Recently, the Travelers added one of North Texas strongest bats and great defensive players.  Rylie Rumfield joined the Texas Travelers and will see time at 3rd base, shortstop, 2nd base as well as the outfield.  She can also pitch if asked to do so.  In short, Riley is a complete ballplayer and will help shore up the Travelers potent lineup.

“When Rylie asked to play for the Travelers, she said she wanted to play wherever the team needs her.  This is a trait that is lost on many of today’s youth.  She has already proven she could play at certain positions on winning teams, but she is unassuming and wants to help the Travelers win at the highest level” states Head Coach of the Texas Traveler, Kyle Bennett.

Rylie Rumfield is a proven winner helping her former teams with the 03 Texas Elite and 04 Texas Shock.  She has been playing softball since the age of 3 and has become one of the top hitters in the country at the 10U level.  She has helped her teams win the 8U VTD World Series where she was the Defensive MVP, 9U USSSA World Series earning Most Valuable Player, and recently helped her team earn a 3rd Place finish in the PGF National Championships.  She was chosen as 10U USA Select Elite All-American Midwest Region Top Performer as well as the Elite All-American Midwest Region Team.

Rylie will eventually be playing for Joshua High School helping them earn a State Championship when the time comes.