Texas Travelers add player full of Desire to be the Best

“Dad, is it really true or am I just dreaming” states the newest Texas Travelers player, Kailee Bautista on her earning a spot playing for the Texas Travelers.

At a young age, Kailee understands that select softball is a privilege and not a right.  She has been working for the past two years to earn a spot on the 04 Select Softball Team and is willing to do whatever it takes to earn playing time on the field. 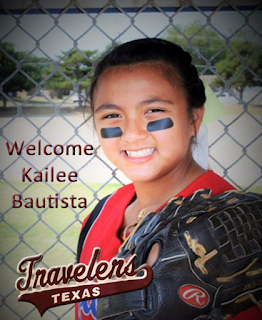 Kailee was born in Chicago and played primarily catcher since she started playing softball at the age of 8 years old.  Her last two teams she played for were the Wild Sox and Texas Glory.  “Kailee impressed the coaching staff with her willingness to listen and do whatever we asked her to do.  She is fearless sacrificing her body just to make a play” states Head Coach Kyle Bennett of the Texas Travelers.  “We love that about her.”

Kailee may not have a ton of experience in select ball, but she has all of the intangibles coaches love to see when it comes to players.  This will serve her well, not only in softball but also in life.  “She is the middle child, so she knows how to make sure she gets what she wants” adds her father.  Bautista will be working at catcher for the Travelers, and looking to help the lineup with her big bat.

She will be 6Th grade at Terry middle school and she is in Quest Gifted and Talented Program.