In the fall of 2014, the Texas Travelers set a team goal for their select softball team to qualify for the 2015 ASA/USA National Championships held in Normal, Illinois.  This week, the Travelers received and accepted the invitation to represent Texas in the most prestigious tournament for girls select softball. 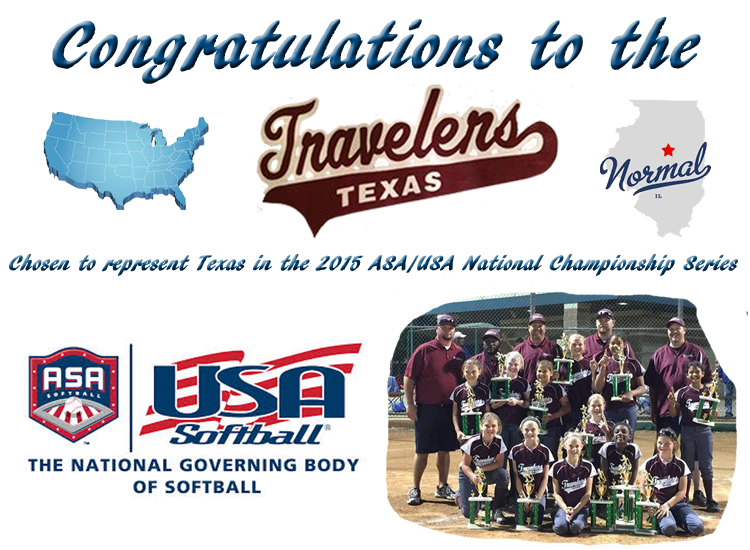 The 04 Texas Travelers organization exists for the specific purpose of developing a competitive youth fast-pitch softball program whose goals are to develop players capable of competing at the highest levels in the country with the demonstrated skills necessary to earn a college scholarship. The dedicated coaches and volunteer staff facilitate our athlete’s growth by conducting challenging practices and scheduling the highest level of competitive activity available. However, reaching these goals must be accomplished within the proper framework by instilling character, self-esteem, confidence and sportsmanship with the young athlete.

Achievement of these lofty and worthwhile objectives within the appropriate environment can only be reached through the mature behavior and exemplary conduct of the coaches and parents of the softball organization.  The Texas Travelers have an aggressive desire for victory combined with the procedural and graduated development of softball skills through exceptional coaching and advanced training techniques.

The 2015 ASA National Championship tournament will be held in Normal, Illinois from July 26 until August 2.