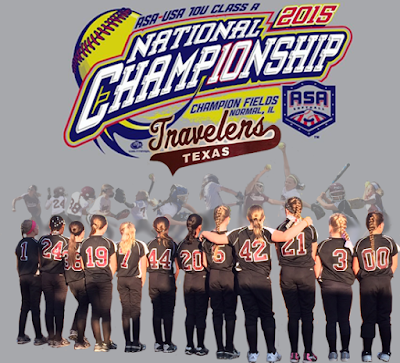 The 04 Texas Travelers set a goal at the end of the 2014 season to play in the most prestigious tournament in the country.  The Travelers stuck to their plan, and were awarded the right to represent the State of Texas to play in Normal, Illinois.

Pool Play will begin for the Travelers at 2 PM July 27th against East Cobb Bullets.  The winner and loser of this game will play either the winner or loser between the Carolina Crush and Heartland Havoc.  Pool Play will determine bracket play with the championship game scheduled for Friday, July 31st at 1 PM.  This will be a double elimination tournament.

The 04 Texas Travelers have worked hard all season as all of these teams who have qualified for the tournament.  They have had hundreds of individual lessons and practices.  The girls have traveled all over the country playing top teams.  Based out of Mesquite, Texas; the Travelers have faced nationally ranked teams just about every weekend.  At the beginning of the year, nobody gave the Texas Travelers a shot at qualifying for the National Tournament, and today they are one of the most talked about teams on all of the softball forums.  Recently, the Travelers finished 3rd in the Junior National Championship as they utilized the local tournament as a warmup for the upcoming week of competition.  No matter where the Texas Travelers finish, they have stayed true to themselves and their game plan giving them every opportunity to be known at the 2015 ASA/USA National Champions.

Good Luck and safe travels to all of the teams.  The Texas Travelers look forward to healthy competition and building great memories for these young softball players.