The 2015 tournament season is coming to an end, and select softball teams are starting to make plans to move up in age divisions for the fall season.  However, a few major tournaments are still scheduled over the next 30 days and top teams in the country are hoping to finish out their season with National Championship hardware. 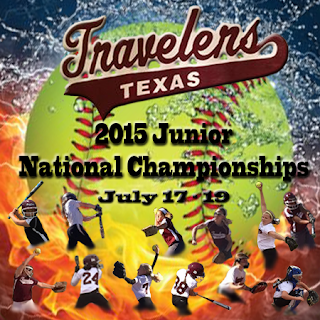 The 04 Texas Travelers have been the story all season in the select softball world.  They started their second year of 10U softball as the underdogs in a David vs. Goliath world and competed admirably in the top qualifying tournaments across the state.  They took their bats, gloves and heart to Oklahoma, Louisiana, Arkansas and other states in their quest of elite status.  In the end, the 04 Texas Travelers became the State of Texas representative in the 2015 ASA/USA National Championship held in Normal, Illinois.

However, the Texas Travelers have one more hurdle to overcome before they make the 12 hour trip to play in the coveted tournament.  This weekend the Texas Travelers will find themselves competing against the likes of Texas Chaos, Texas Glory, Firecrackers, Impact Gold, Louisiana Titans, Batbusters, and other softball teams in the 2015 Junior National Championships.

The Travelers will start bracket play in the double elimination tournament against the STX Venom at 9:35 on field one Friday, July 17th.  If they win, they will play Burleson Blast at 1 PM.  The winner of that game will then play at 6 PM.  If all goes as plan, the Travelers will play at 6 PM on Saturday.  If they continue to win, the championship game is scheduled to take place on Sunday the 19th at 4:15 PM.

Good luck and safe travels to all of the teams competing this weekend in Waxahachie, Texas.