From May 29th to June 1st softball in Oklahoma and the world for that matter doesn’t get any better.  The College World Series is taking place during that time, but the Triple Crown OKC will also feature some of the top teams around the United States as well. 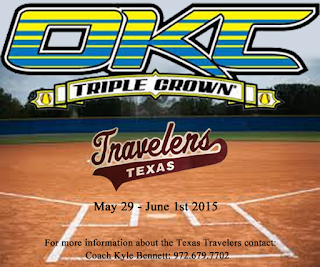 The Texas Travelers will have their newest team member with them in Oklahoma City.  Coach Jordan Strickland, Baylor Bear softball legend and 2014 Women’s College World Series All-Tournament Team selection will be making her coaching debut this weekend.  “I could not be more pleased to have Jordan join our coaching staff. She is a remarkable young woman with a great career, and an excellent role model for all of our girls to imitate” states, Head Coach of the Texas Travelers, Kyle Bennett.

The Texas Travelers will face the Heartland Havoc Saturday at 11:30 am and then the Texas Stealth at 1:15 pm both at Reeves Park in Norman, Oklahoma.  On Sunday they will face Oklahoma Steele at 8 am and then Impact Gold at 11:30 am.  Depending how the Travelers compete those two days will determine who and when they will play on Monday in single elimination bracket play.  Bracket play starts at 8 am with the championship game scheduled for 4:45 pm deciding who will be the Triple Crown OKC Champions.

The competition will be fierce, but the Texas Travelers support will be strong.  Good luck to all of the girls competing.

For more information on the Texas Travelers, players, coaches, or schedules visit the Texas Travelers News Network or follow the team on Facebook.  The Texas Travelers take pride in competing at the highest level possible for select softball.  They have earned the right to represent Texas in the 2015 ASA/USA National Championships in Normal, Illinois.

The Amateur Softball Association (ASA), a volunteer driven, not-for-profit organization based in Oklahoma City, OK, was founded in 1933 and has evolved into the strongest softball organization in the country. The growth and development of the association led the United States Olympic Committee (USOC) to name the ASA the National Governing Body of Softball, pursuant to the Amateur Sports Act of 1978.

The ASA has many important responsibilities as the national governing body of softball in the United States, including regulating competition to insure fairness and equal opportunity to the millions of player who annually play the sport.  When the ASA entered the softball picture in 1933, the sport was in a state of confusion with no unified set of playing rules and no national governing body to provide guidance and stability. The ASA changed all that by adopting softball's first universally accepted rules of play and by organizing consistent and fair competition across the nation.

From this beginning, the ASA has become one of the nation’s largest and fastest growing sports organizations and now sanctions competition in every state through a network of 74 local associations. The ASA has grown from a few hundred teams in the early days to over 200,000 teams today, representing a membership of more than four million.